Among the industries grappling with the issue of large energy bills are self-storage companies who manage large volumes of climate controlled space. Most often they have a network of large capacity buildings throughout the country where a significant amount of energy consumption occurs, and a single corporate office which sets energy use policies and pays the bills.

The electric company typically provides a lump sum bill at the end of the month. If the current monthly total is higher than the previous month the cause is often not obvious. Was the increase due to weather, a short-term glitch, or a prolonged pattern of neglecting to pay attention to usage patterns? It is difficult enough to get control of your energy usage when you’re right on top of it, but the problem is even tougher for businesses that manage remote facilities, thousands of miles apart.

Energy monitoring and control system providers are sensitive to this problem, and apply their knowledge of automation technologies to implement control strategies that consistently save businesses as much as 30-35% on their energy bills. The savings are realized quickly enough to achieve a 6-month to two-year ROI when an energy management and control system is installed.

Let’s take Safeguard Self Storage, Inc. of Atlanta, Georgia as a case in point. Corporate facilities management personnel in Atlanta are responsible for managing the company’s 60+ locations nationwide. About three years ago, headquarters suspected that money was being wasted on excessive energy use at Safeguard’s Bronx, New York facility. At that time, energy for this facility was costing Safeguard approximately $55,000 per year.

Safeguard contracted with a supplier and integrator of environmental control systems to perform a study of the energy consumption patterns at the Bronx site. The integrator found that the thermostat at the facility was being maintained at 72º throughout the year, despite a corporate standard of 78º in summer and 55º in winter. Even more excessive cooling or heating was occurring because the thermostats had lockboxes that weren’t locked and anyone could change the settings at will.

In addition, the inspector found that the outside lights were on continuously because time clock settings were removed. Facility energy costs can be reduced significantly by shutting off unnecessary lighting outside of operating hours, although this is not always desirable for security reasons.

As a result of the findings in the report, Safeguard asked the integrator to help them bring energy costs under control at the Bronx facility. Technicians removed the building’s thermostats and light switches and installed a central building management system. The system provides automated lighting and climate control for the Bronx facility consistent with Safeguard’s corporate energy use policies. 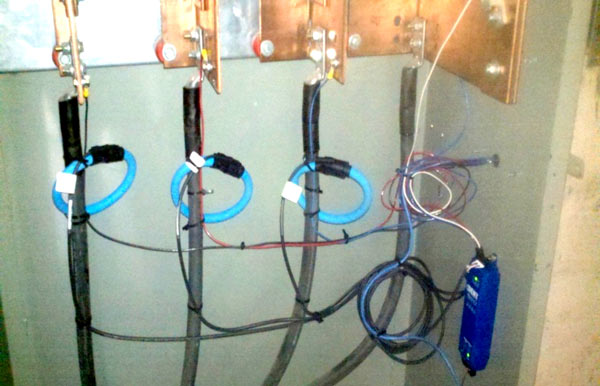 The control system relies on a DENT PowerScout 3 power meter for accurate, continuous monitoring of loads in the facility. For ease of installation, the system uses Rogowski-style current transformers (CTs), and easy Modbus integration to the central control system. The flexible “rope” style sensor coils are installed around the electrical service lines going to the lighting and HVAC equipment. Their flexibility makes them easier and faster to install in most cases than current sensors that employ rigid clamps. The CTs that were selected also support a 50-5000 Amp range so one set of CTs can provide accurate data whether the facility is at peak demand or is fully turned down.

With the installation of the new control and monitoring system, Safeguard cut the energy demand charge component of the monthly power bill by two thirds, and achieved a nine- to twenty-four month return on their energy cost management system investment.

“By focusing on demand control, we are reducing our carbon footprint, lowering our operating costs, and improving our margins. Also, by monitoring our HVAC units, we were able to reduce our maintenance cost by 28% with a savings of $44,000,” said Mike Frosaker, VP of Asset Management for Safeguard Self Storage.

Since the Bronx pilot project, the monitoring and control system installation has been repeated at 61 other Safeguard facilities with similar positive results. For example the Oak Lane, Philadelphia facility, the second Safeguard facility to be automated, saved $20,000 in energy costs the first year after an initial investment of $14,000.