Portland, OR. – To the passerby, the Vestas Headquarters in Portland’s Pearl District, looks like a simple, modern commercial building converted from a historic block building. Hidden beneath the surface, it is in fact one of the highest performing office buildings in the country.

Renovated from the old Meier & Frank warehouse into Class A office space in 2012, the Vestas North American Headquarters is a leader in energy savings. While the average office tenant in the North West pays around $1.60 per ft2 in annual energy costs, the Vestas North American Headquarters’ cost of energy is below $0.50 per ft2. In 2013 alone, annual energy costs are just $0.45 per ft2, helping the owner improve their bottom line.

After nearly two years of operation, Vestas is consuming approximately 70% less energy than a conventional office building in the Pacific Northwest and is on track for an Energy Star score of 99, making it one of the most efficient large office buildings in the entire country. The building achieves these benchmarks mostly from a dual path HVAC system, efficient lighting design, a rooftop solar electric system and a building performance dashboard.

Dual Path HVAC
The innovative HVAC system is responsible for 40% of the energy savings. Fresh air is supplied through an underfloor air distribution system, with individual air control at each desk. A supplemental system maintains thermal comfort in each local area using a variable refrigerant flow system. The HVAC system uses less than half the energy of a conventional variable air volume system used in most office buildings across the country.

This HVAC system is a variation of a dual path system and is becoming a common approach for low-energy use buildings. A dual path system separates control of outside air for ventilation from a local thermal comfort system that maintains occupant comfort. As a result, the building only uses energy to maintain comfort when and where it is occupied. Dual path systems have been used at the Portland Mercy Corps Headquarters, two buildings on the PCC Cascade campus, and the Edith Green Wendell Wyatt Federal Building in Portland, OR, and the Experience Music Project Launchpad building in Seattle, WA. All of these projects represent the newest standard in achieving low-energy use in Pacific Northwest office buildings. 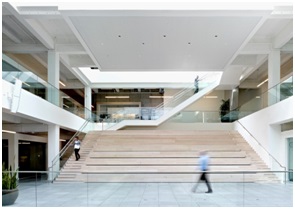 Lighting Design
The lighting design accounted for 15% of the energy savings. The design focused on providing enough ambient light for the space, but with local task lights at the desks that allow staff to adjust light levels to their individual needs. Typically, offices provide lighting for all needs in all areas all the time, which results in excess power consumption. In this case, daylight dimming controls were integrated into the ambient lighting system as well, in order to use artificial lighting as a supplement to natural light from outside. Perimeter windows maximize natural light and the atrium draws light into the core of the building. As a result, the total lighting energy consumed is approximately 75% less than a conventional office building. 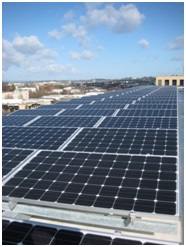 Solar Photovoltaic System
A 125 kW solar array provides 10% of building energy use each year. The system occupies approximately 16,000 sqft of the roof outside the fifth floor penthouse. Occupants can see the renewable energy system outside their windows, and energy production is visible via the Building Performance Dashboard.

Building Performance Dashboard
The utility dashboard has been a key part of attaining actual energy savings. The system, provided by DECK Monitoring, helps building staff better understand electricity, gas, and water consumption in the building. After six months, the building was on track to perform as expected with an Energy Use Intensity (EUI) of 37 kBtu/ft2. Using the data, Glumac worked with building staff to understand operations and where further savings could be achieved. This resulted in an EUI of 23 kBtu/ft2, an additional energy savings of 20% in an already high-performance building and almost $30,000 annual savings in operating costs.

As the commercial real estate market begins to renovate aging, historic buildings across the Pacific North West, following the Vestas system blueprint can be a successful strategy for building owners. The Vestas building systems infrastructure is smaller, thereby maximizing usable square footage. The integrated daylight dimming controls create more inviting work spaces while upholding a commitment to sustainability. Finally, the robust monitoring helps to maximize savings and ensure that they continue over time. This design approach helps create the modern office space which is in high demand in the current real estate market while repurposing the existing built environment.

To learn more about energy saving solutions for your building, contact Mitch Dec at mdec@glumac.com.