Last week, NEEC joined hundreds of other clean energy stakeholders to celebrate the passage and signing of several important pieces of climate legislation in Washington. We thought now was a good time to recap all the news coming out of the Washington State 2019 Legislative Session. 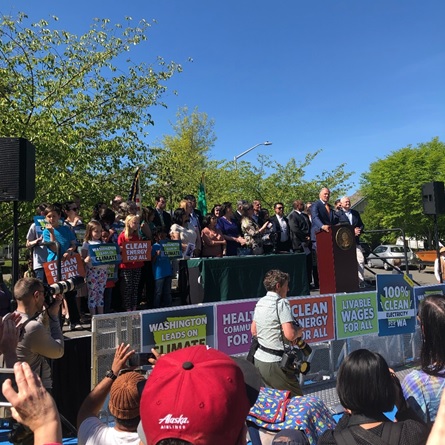 NEEC strongly supported the passage of HB 1257, the Clean Buildings for Washington Act  which seeks to limit emissions from the built environment. This bill positions Washington State as a national leader on building efficiency by establishing a first-of-its-kind commercial building energy performance standard for buildings larger than 50,000 square feet. This is a technical but transformative bill. In the last decade, technology and consumer mindsets have blurred the boundaries between generation, storage, demand response and efficiency resources. It no longer makes sense to think about each piece of equipment inside a building (i.e. efficiency measures) when the technologies are connected and controlled in a holistic manner. This bill helps move our thinking about buildings from individual pieces of equipment to how the building as a whole is performing, from the mechanical systems to the occupant interaction with and behavioral choices inside the building. We are very excited about how a performance standard will transform the mindset of building efficiency.

NEEC also supported SB 5116, 100% Clean Energy, which passed this session.  This bill transitions our state’s electric grid to 100% clean power by 2045 and has generated a good amount of media attention.  The legislation establishes a pathway for utilities to transition off carbon-emitting resources starting with coal by 2025. Then moves the grid to GHG neutral between 2030 to 2044, during which time the utilities will be able to leverage alternative compliance to meet 20% of their load while the other 80% will have to be met through non-emitting electric generating resources and renewables. Finally, utilities will be required to generate 100% of their power via non-emitting resources by 2045. NEEC is excited to see our state act to mitigate carbon emissions from the grid. We’re also intrigued by the “energy transformation projects” allowed as “alternative compliance” during the GHG neutral phase of the legislation. We look forward to engaging with rulemaking proceedings to better understand what these projects might include and how customer-sited efficiency and technologies might participate.

Several other bills passed the legislature that are worth noting:

And lastly, the WA Legislature passed the Biennium Budget with several allocations of note:

Please reach out to Kerry if you have any questions about the items included here or other items related to new Washington legislation.

The Oregon legislature remains in session until the end of June. NEEC is continuing to monitor HB 2020, the cap and trade bill. All indications continue to point toward the legislature passing this landmark legislation, which increases the statewide carbon reduction goals and creates a cap and trade program (the OR Climate Action Program) in the state. The program would function as you expect by capping carbon emissions and providing for a framework for compliance. Funds related to compliance would flow into several fund buckets to be spent in specified areas.

This year’s bill builds off an earlier attempt to pass legislation like this in last year’s session. After the session ended, Governor Brown created a joint legislative committee with the goal of creating a bi-partisan bill that will pass the legislature. At this point, the bill, which was introduced at the end of January, has not yet been voted on. The Committee has been through two rounds of amendments, the most recent were released two weeks ago.

Utility energy efficiency programs as they function today would largely be unaffected by this legislation, although there will be a modest improvement in the cost-effectiveness of energy efficiency as utility costs are increased by compliance with the legislation. Energy efficiency is also included as a way to reduce GHG within the state; again, this efficiency cannot already be required by law. This opens opportunity to potentially acquire energy efficiency that isn’t required by law, but how that is defined will be determined in rulemaking if the bill passes. NEEC also sees some opportunity to build new markets for energy efficiency as a distributed energy resource, which is an allowable approach to decarbonizing the grid in Oregon. We’ll keep you posted as this bill progresses through the legislative process in Oregon, and please reach out if you have any specific questions.